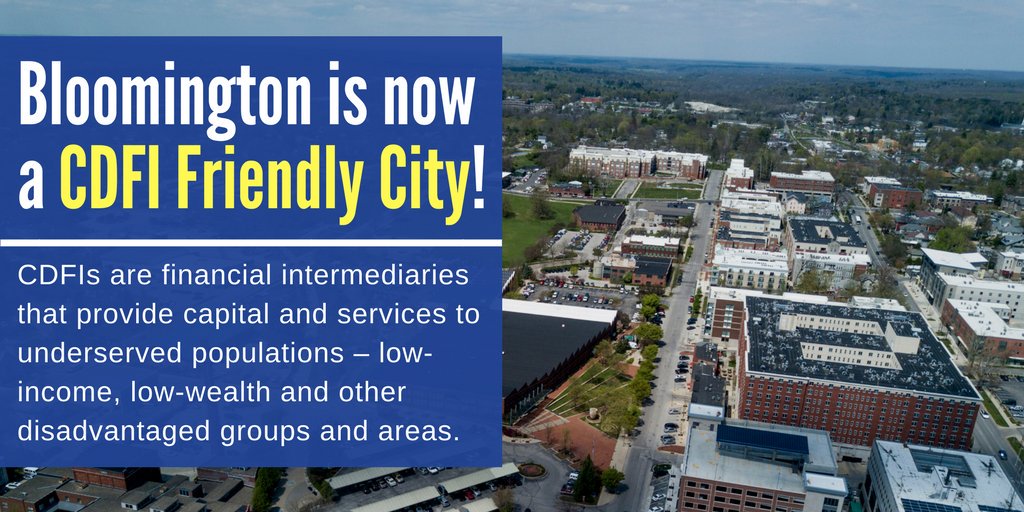 “We applaud the CDFI strategy for the City of Bloomington,” said Dan Letendre, CDFI Managing Director, Bank of America. “With more than $1.6 billion invested in CDFIs across the country, we understand the tremendous impact that these local lenders have on building thriving communities, and look forward to investing capital in CDFIs working in Bloomington.”

Mayor Hamilton is also asking that $2 million of local public funding be dedicated to attract such outside financing. “We hope to use that local money to leverage at least $4 million from outside private investors.”

Bloomington will benefit from CDFIs and the expertise they bring to make capital fit local needs,” Hamilton explained. “Smaller markets like ours usually don’t have access to CDFIs, so we’ve had to be creative. This innovative CDFI Friendly City approach we are launching today is informed by decades of experience in larger cities but is uniquely designed to support small urban and rural communities.” Outlining local resources needed to attract outside resources, Hamilton added: “I will ask the city’s Redevelopment Commission to earmark $1.5 million for affordable housing support – including workforce housing and ownership and rental – that will be available to leverage CDFIs willing to invest in our community. And I will ask BUEA to earmark up to $500,000 to join with CDFIs willing to support local and nontraditional small business growth in our community.”

CDFIs are financial intermediaries that provide capital and services to underserved populations – low-income, low-wealth and other disadvantaged groups and areas. For more than 30 years, CDFIs have produced substantial community impact through jobs, affordable housing, and sustainable community facilities, as well as solid financial returns. More than 1,000 CDFIs operate in the U.S., providing billions of dollars of financing annually. But smaller markets, including cities such as Bloomington, often face challenges attracting CDFI financing.

Several local projects have already been identified as potential recipients of outside CDFI financing, including a number of affordable housing projects currently in the planning process at the City, and facilities such as child care centers and community-oriented businesses. Several CDFIs have expressed interest in expanding their portfolios in the city.

The announcement culminates nine months of work with seed funding from the Community Foundation of Bloomington and Monroe County and the Bloomington Urban Enterprise Association. Led by a local CDFI working group, the deployment of this CDFI Friendly City approach included a market assessment of potential investment opportunities in and around Bloomington, outreach to national CDFI leaders and investors, and a first-of-its-kind Bloomington symposium last November with representatives of local, regional, and national CDFIs, banks, and foundations, as well as the U.S. Treasury’s CDFI Fund. “By connecting directly with regionally and nationally recognized CDFIs with a “CDFI Friendly City” approach, we’re very pleased that we’ve garnered significant interest in providing new CDFI financing in Bloomington,” said Hamilton.

“It was encouraging to have leading CDFIs from Pennsylvania, Illinois, Michigan, DC, and Indiana express interest in the opportunities in Bloomington,” added Hamilton, referencing the November gathering. “CDFI executives from Wells Fargo, PNC, and Key Bank, as well as the MacArthur Foundation, came to help us design an approach that would work for Bloomington and this region.”

The CDFI working group made up of representatives from the city, local business, the Bloomington Urban Enterprise Association and the Community Foundation of Bloomington and Monroe County has been working with a longtime CDFI industry leader to shape the project. “Five/Four Advisors President Mark Pinsky helped us think of Bloomington as a CDFI Friendly City and to understand the capacity of CDFIs to help us meet a wide range of local needs,” said

Tina Peterson, president and CEO of the Community Foundation. Pinsky served for more than 20 years as President & CEO of Opportunity Finance Network, the CDFI industry’s leading national trade association, and was Chairman of the CDFI Coalition, a national industry group.

“Bloomington identified financing needs and set out in 2017 to innovate a new way to meet them,” Pinsky explained. “National CDFI industry, mainstream banking, and foundation leaders are enthusiastic about what Bloomington is doing. The Bloomington Project is possible because the Mayor, the Community Foundation, and the BUEA made sure the full array of partners had a voice in defining Bloomington as a CDFI Friendly City.”

“Flexible, affordable financing from CDFIs attracts investments from national and regional banks and foundations into local communities,” added Peterson. These combined investments can help address a community’s most pressing needs and compelling opportunities, supporting nonprofit enterprises, catalyzing small business growth, and expanding affordable housing, explained Peterson. “These areas traditionally struggle to secure the capital necessary to optimally serve those who need community support to succeed and thrive, and we are excited about the potential that CDFIs bring to Monroe County.”

In the coming months, Bloomington leaders and community advocates working with Five/Four Advisors will develop a business plan for Bloomington’s local approach to secure funding commitments for operational support and investment, and establish a local entity to guide the effort in our community.

Five/Four Advisors has documented The Bloomington Project: A New Approach for Expanding CDFI Coverage in Smaller Markets in a white paper available here.

We Believe In Opportunity. For All.